Airsoft is a shooting game that can get pretty close to the real military experience if it’s played with skilled players and follows a specific scenario. However, the guns and the fields are designed to avoid fatal injuries at all costs, so there are limits to just how real it can get.

Don’t get me wrong – this is a good thing! After all, no one wants to go for a round of airsoft without the certitude that they’ll be able to return home afterwards.

What I’m trying to say is that, even though they may look and feel like real steel weapons, airsoft guns can’t provide the full-on shooting experience. For once, the sound is not as loud and no airsoft gun can create the same recoil a real gun does. Still, if you’re looking for airsoft guns that will feel close to real ones, I recommend looking for a GBB rifle or pistol with shell ejecting rounds.

To use them, you’ll first have to load the BBs into the cartridge, which will be loaded into the magazine, which will then be inserted into the gun. This way, whenever you press the trigger, the shells will also be ejected, creating a more realistic shooting experience.

Side note: you can also use a shotgun with shells to get a similar outcome. In this case, the BBs go into the shell, which is loaded directly into the shotgun. The shotgun needs to be racked, and so when you pull the trigger, the BB is propelled out of the barrel. But the spent shell will be ejected with the next rack.

If you’re interested in shotguns, I have a great article on the best airsoft shotguns, so make sure to go check it out!

However, both airsoft shotguns and airsoft guns with shell ejecting rounds are not very efficient on the field. The low-capacity magazines and the fact that you have to pick up the cartridges make it difficult to play at ease. So, in my opinion, realistic airsoft guns (and yes, shotguns too) are mostly for show.

If you’re looking for an airsoft gun that will be efficient on the field, I recommend checking out my guide on the best airsoft gun.

Still, for those of you who still want to get as close as possible to the real shooting experience, here are a few highly realistic airsoft guns to try on:

GBB pistols are among the most realistic airsoft guns out there because you actually get to feel the recoil and the sound is quite loud. Now, the Hi-Cappa 5.1 from Tokyo Marui is one of the most reliable and easy to upgrade pistols on the market. It has a high round count and you can find it in both full-auto and semi versions. As a result, most competitive shooters have at least one version of the pistol, with or without upgrades.

Moreover, it’s easy to find affordable parts, so you can make it your own without investing too much in customizations. For instance, this version can be made fully metallic, which gives it a nice heft in your hand. However, you can also use it out-of-the-box and the experience will be quite realistic as well.

Overall, even if it doesn’t spit out shells, this airsoft pistol is one of the best in terms of recoil, gas efficiency, and accuracy.

If you like this airsoft GBB pistol, you should also try the
Tokyo Marui Hi-Capa 4.3 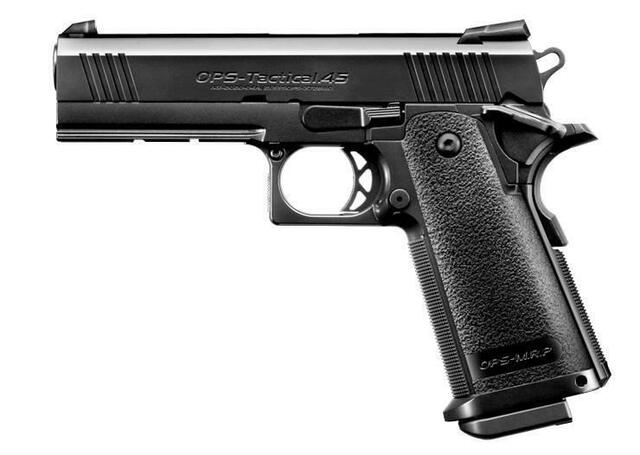 Glock GBB pistols are reliable and solidly built, so players get the full experience out of them. Moreover, the Glock 17 Gen 5 comes with a few extra features that make it perform better than earlier versions (Gen 4 and Gen 3).

For instance, both right-handed and left-handed users can now play with this pistol due to ambidextrous controls. Also, the blowback unit is improved, so you get to feel a bit of a kick with every squeeze of the trigger (to get that realistic feeling). Additionally, the Gen 5 is more gas efficient, which is good news for avid players who still want the realistic experience but don’t want to bother with reloading every few shots. Lastly, the Gen 5 comes with a flared Magwell on the pistol grip to make reloads easier.

If you like this airsoft GBB pistol, you should also try the
GLOCK 19 Co2 Powered .177 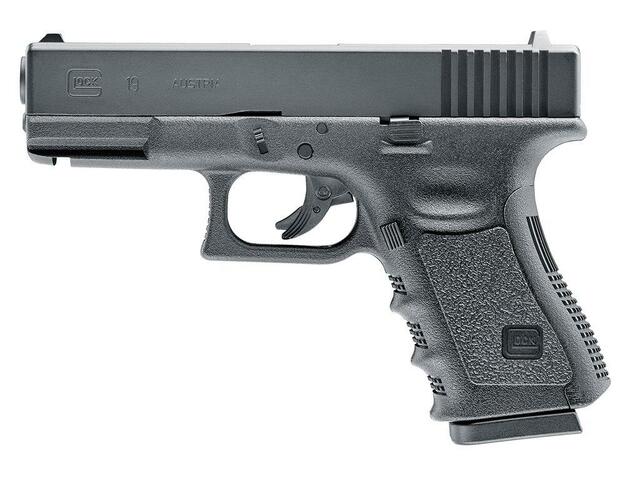 When it comes to airsoft, the revolver is one of the most realistic guns on the market. Revolvers are even better than shell-ejecting models because they respect real-steel models’ action without adding extra features to bring the experience closer to reality.

Moreover, whenever you hold a revolver like the Dan Wesson 715 your inner cowboy starts to wake up and you feel ready for a duel. After all, there’s nothing more real than reloading a single-action wheel gun and thinking about your favourite western movies!

This revolver in particular is massive and rugged. It has a 6-inch barrel, you can attach a scope to it, and it has a solid recoil action. Additionally, the double-action trigger is light, which makes it perfect for quick shooting.

This Dan Wesson design is equipped with an interchangeable barrel system to make it more accurate and a forward crane latch keeps the cylinder and barrel in proper alignment during firing (fewer jams). Lastly, the cylinder rotates clockwise, reducing the stress put on the crane, making the entire design more durable.

So, next time when you want a realistic airsoft gun, try a Dan Wesson revolver – it feels amazing in the hand and the long barrel and silver housing make it quite an intimidating pistol!

If you like this airsoft GBB pistol, you should also try the
Dan Wesson 715 4″ 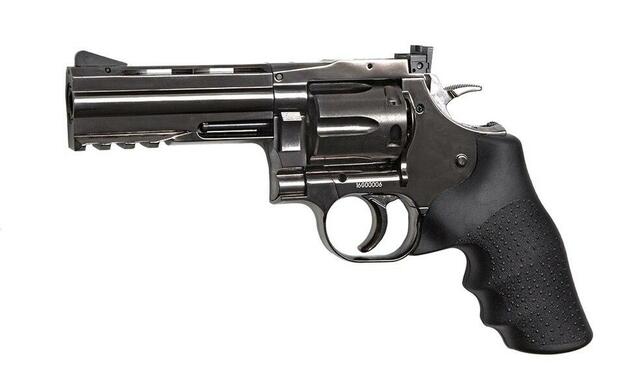 There’s nothing more thrilling than buying an airsoft gun designed after a gun used in an action movie! In this case, we have the Taran Tactical Innovation (TTI) 2011 Combat Master, which was built following the specifications of the pistol used in the John Wick franchise (mostly featured in the third movie).

The pistol is licensed (of course) and looks a bit like a Tokyo Marui Hi-Capa due to the rugged pistol grip and metallic slider. I also love the gold outer barrel and the skeleton trigger. Plus, the gas reservoir is large and it comes with magwell, to make reloading a breeze.

Overall, the pistol feels heavy in your hands (due to the metallic build) and has a solid recoil action; plus, it’s quite noisy. In short, if you want an impressive pistol with well-designed internals and a solid build, this one should be on your list!

A bit of a fair warning with this pistol – the grip is massive and the entire design seems to have been created for people with large hands.

Other than that, the FNX-45 has a large gas reservoir (it uses green gas) which means the blowback action will be quite strong (it’s also gas efficient). Additionally, it’s one of the few designs to come with an optic-ready cut built into the slide. Also, the tip has a 16mm CCW thread so you add a suppressor of your choice.

The FNX-45 is a double-action pistol fitted with a decocker on the left side that releases the hammer to half-cock (just like the real steel version). And, just like with the real deal, you have to pull down the take-down lever to take it off.

Lastly, the pistol has an adjustable hop-up unit situated under the slide – you need to pull the slide back in order to reach it.

If you like this airsoft GBB pistol, you should also try the
Desert Eagle .50AE 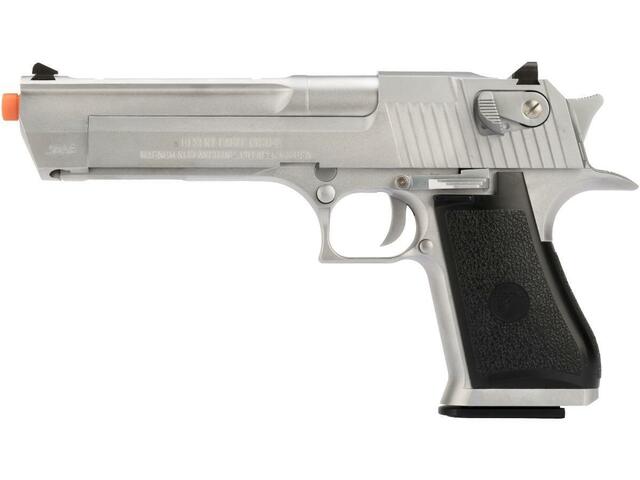 Now, you may wonder why, in an article about the most realistic airsoft guns, I left the ones that offer the real-deal experience for the end of the list. Well, the answer is simple – shell-ejecting rifles are a niche product and only airsofters who want the truly realistic experience actually buy them. The main problem with these types of rifles is the fallen shells (which you have to pick up) and the low-capacity mag.

Additionally, this type of rifle is used for military training and simulation, to get participants used with the real gun without the risk of injury.

Therefore, most players will have a bit of fun with this type of rifle and then move onto more efficient models, built for actual simulated battles.

This full-steel CO2 rifle has a solid blowback action and comes with two 15-round magazines and 30 shells. It has quad rails (for accessories) and a monolithic upper rail with flippable front and rear sights. It also has an adjustable hop-up unit, placed in front of the receiver. However, the positioning is not that fortunate since the hop-up will be difficult to reach if you install a scope that sits low on the rail.

Overall, the rifle delivers according to its promise – it has a solid recoil and it ejects a shell with each shot. It only shoots in semi-auto mode and it even jams from time to time (which is perfectly fine since real steel weapons also jam). Lastly, the rifle is gas efficient (it works with CO2) – one gas container should last for about 40 shots (about two magazines) before you run out.

I have to say that I love the idea of a shell-ejecting sniper rifle! In this case, your movements on the field are not hindered by the falling shells, and the entire experience of loading the shell by hand is mesmerizing. Once you take the shot, all you have to do is pull back the bolt and allow the spent shell to jump out. Next, you load another shell and repeat the steps above.

This single-shot rifle truly makes you feel like a badass sniper, like the ones you admire in movies and video games!

The APS APM50 works with two 12g CO2 cartridges, has a 6mm calibre, and can shoot up to 500 FPS. Moreover, the rifle maintains its rate of fire all throughout the gas container’s life (it doesn’t drop as the gas goes low). This is due to the small gap between the chamber and the cartridge, which helps prevent power loss.

Overall, the rifle does feel like a real steel design due to the metallic barrel and bolt assembly. Additionally, it comes with a built-in scope rail and a Harris-style bipod mountain point. The bolt can be detached easily due to the quick release chamber system and you can use the buttstock for storage.

In the end, I have to agree that shell-ejecting airsoft guns can be a lot of fun. However, they are not as efficient as AEGs or standard GBBs, which is why you don’t see them a lot in a real airsoft battle. So, if you’re looking for a realistic airsoft weapon that’s also great on the field, I recommend you have a look at my best gas-powered airsoft guns guide.