Airsoft vs. Paintball: Which is More Fun and Why? 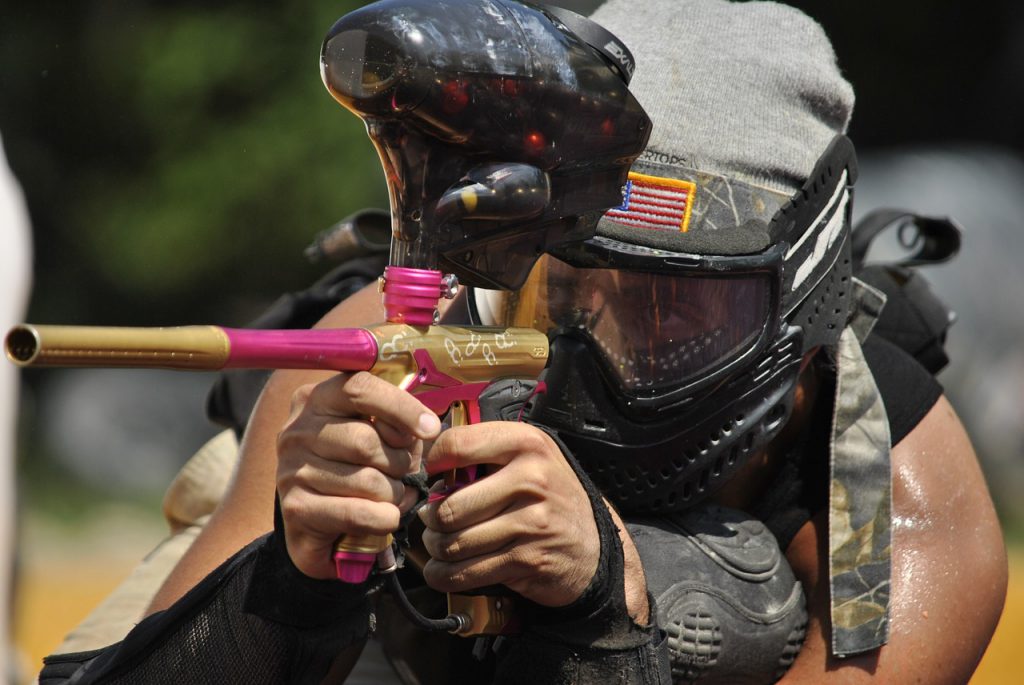 The airsoft vs. paintball debate is ongoing ever since the two sports were invented and we still can’t reach an agreement. The two teams seem to be in a perpetual fight over which activity is best and why, and today we’re here to finally give a ruling.

We play both airsoft and paintball at an advanced level, and we’re not biased towards neither. This makes me and my teammates the best possible judges to this matter. We’ll go point by point and, at the end, draw the line and count the points.

Are you curious to see which one wins?

Given that airsoft is a game designed to imitate warfare, both the equipment and the guns are created in this spirit. As such, the weapons are created following real steel weapons, which is why you get a wide range of models, types, and features.

In our opinion, modern airsoft weapons manage to impress even real-life shooters! Some are so well designed that it’s extremely difficult to tell the difference without using it with your own hands. Furthermore, the internals are built following the same principles of real guns, so you get different levels of power, range, and accuracy.

If you like weapons but don’t have the budget to invest in real steel designs, you won’t get bored as an airsoft player!

Now, besides the cool weapons, airsoft also features amazing equipment. There’s a lot of tactical gear that can be used in the field. Things like full-face masks, helmets, goggles, tactical vests, gloves, and so on.

When it comes to paintball, the guns they use (called markers) are nothing to write home about. We all know the classic shape of a paintball marker because it’s the same in every context. The difference here is made by the type of ammunition they use (which we’ll discuss a bit lower) and how it needs to be loaded and propelled into and from the weapon.

The equipment can be similar to the one used for airsoft, but it’s best to get thicker clothing with heavier padding (you’ll see why in the ammunition section). Furthermore, paintball players are always focused on creating special equipment for the team, using colors and tag names.

If you look at the big picture, both airsoft and paintball are shooting games that use some type of projectile to eliminate members from the opposite team. Both activities use weapons and players must implement a game of hide-and-seek in a predetermined perimeter.

But, at a closer look, you’ll see there are lots of differences. In fact, the differences start sticking out even before you get to see the weapons and the gear. They start at the ammunition.

Airsoft weapons use (as a standard) plastic projectiles called BBs (in exceptional cases, they can also be metallic or rubber). They have different weights, but the standard for the field is 0.20g and measure 6mm in diameter.

Paintball weapons use soft projectiles (made of polyethylene glycol, dye, and other non-toxic substances) with a gelatinous cover. They weigh around 3g and have 17.3 mm in diameter or more, which is about three times the size of a BB.

Now, you can only imagine the result if a player is hit by a paintball and a BB at the same speed and range. We actually did an entire article where we talked about the differences in pain, so if you want to know more, have a look here.

Besides the obvious content, size, and power differences, paintball projectiles are a lot more sensitive to weather and the environment, so they require a lot more care. As such, if you’re looking for some good time without worrying too much about the ammo or bruises, airsoft looks like the better choice.

If the differences in ammo, guns, and equipment are not enough, then the difference in style must convince you that we’re talking about two different activities.

Airsoft players see themselves as warriors on the field, fighting for their land and the peace of their families. They take military strategy extremely seriously, and everything is a military simulation. We even have worldwide airsoft events that take place in specially selected locations where players can use the natural environment (forests, hills, swamps, and so on).

The weapons are also designed to be realistic and the gear is very military-like. So, for those of you who want to live the soldier experience, airsoft may be a fantastic choice.

On the other hand, paintball is all about being a team player and enjoying a sportive activity that’s both exciting and relaxing. They are more inclined towards the athletic side of the game and don’t take it too seriously. After all, if you have a grudge on someone, it’s enough to hit them in the butt with a paintball!

Which One’s Best: Airsoft or Paintball?

They both are great, but the final draw depends on each player’s personal preferences.

Airsoft is better if you like the realism of the fight and enjoy military simulations. Also, airsoft guns are so amazing these days that it’s quite difficult to resist buying one just to look at it. Modern designs are made with heavy-duty materials such as metal, wood, or durable ABS, and have incredibly well-designed internals, so they look and feel real.

Paintball is better if you appreciate the sportsmanship of the activity and enjoy teambuilding games. Furthermore, paintball looks non-threatening due to the easy-to-recognize shape of their markers. So, if you don’t feel comfortable around real steel weapons you may prefer paintball over airsoft.

Regardless, both sports will help players improve their focus, develop teamwork and leadership skills, and work on their fitness. Also, if you like playing in outdoor fields, you also get to enjoy some time in nature, which is highly recommended.